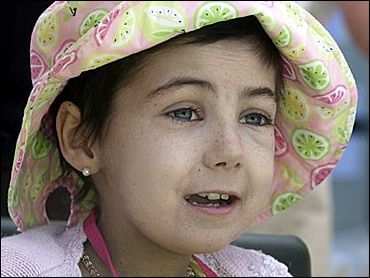 I'm really surprised I never wrote about this neat cause before but something reminded me of it the other day! It's called Alex's Lemonade Stand Foundation for Childhood Cancer.

I remember seeing little Alex on Oprah or something years ago. She was an AMAZING cancer survivor, so young and sent such a neat message. Her story is inspirational and straight from the website, here it is:

In 2000, a 4 year old cancer patient named Alexandra "Alex" Scott announced a seemingly simple idea -she was holding a lemonade stand to raise money to help "her doctors" find a cure for kids with cancer. The idea was put into action by Alex and her older brother, Patrick, when they set up the first "Alex's Lemonade Stand for Childhood Cancer" on their front lawn in July of 2000.

For the next four years, despite her deteriorating health, Alex held an annual lemonade stand to raise money for childhood cancer research. Following her inspirational example, thousands of lemonade stands and other fundraising events have been held across the country by children, schools, businesses, and organizations, all to benefit Alex's Lemonade Stand Foundation for childhood cancer.

OUR VISION: A Cure for all children with cancer


There's also the book- Alex and the Amazing Lemonade Stand that I bought years ago and plan to read to my kids one day!

Sometimes it takes a simple idea to make a HUGE difference...just a thought.

Today, I am grateful for: my first bridal shower tomorrow (very exciting!), time with family and friends and God.

I loved her idea too! Sorry I'm missing the shower, but I got to help pick out the gift and I'll be there in spirit:).

I love Alex's Lemonade Stand - her hospital was CHOP (children's hospital of Philadelphia), which is an amazing place.....I know in NJ, you can buy single bottles of Alex's lemonade and pink lemonade in the supermarkets and convenience stores....it's soooo yummy!
have fun at your shower!

i am so sorry to hear what happened to her. i am just happy ur happy9